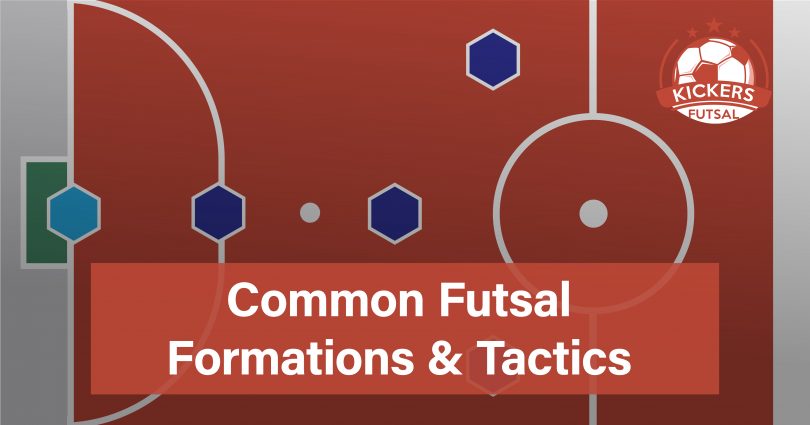 Futsal is a FIFA accredited indoor soccer game. It is played indoors with five people in a team including the goalkeeper. The pitch is roughly the size of a basketball court, and they use a smaller ball compared to soccer. Players need to continually brush up on their futsal tactics since the game favors quick decision making and ball control. In this article, we will cover the best futsal formations.

The flat indoor pitch uses 2×3 meter goals and a size 4 ball that has reduced bounce. Unlike soccer, futsal has unlimited substitutions since the players are constantly running on and off the pitch. In this article, we look at everything you need to know about futsal, right from the futsal team setup, to formations, and tactics to make you a better player.

Futsal, like soccer, has players in different positions of the pitch and have different responsibilities. Futsal has five players:

Most of the popular soccer players started by playing futsal, and it taught them the necessary skills required to play in the big leagues. This includes players such as Cristiano Ronaldo, Lionel Messi, Luis Suarez and more.

Winning is absolute satisfaction, whether you are playing it for fun or at a professional level. To win at a game of futsal, you need to have a strategy on player placement. However, to do this, you need to consider these futsal tactics:

In traditional soccer, where teams have 11 players, teams use formations such as 4-4-2, which is the most popular, or the more modern 4-3-3. There is also the hybrid 4-5-1 formation. However, in futsal, most players tend to play in all positions at different times of the game.

With that said, there are three critical roles in a futsal game, the goalkeeper, defender, and attackers. The positions will change depending on the opponent’s strength, your goal, and the players’ familiarity with each other. Here are some of the greatest futsal formations: 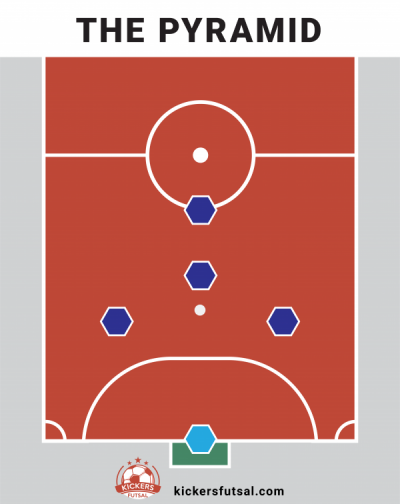 This formation consists of 2 defenders, 1 midfielder, and 1 attacker. It is a defensive formation, and the result would be fewer goals. It is the best formation if you are playing strong opponents. The key to success in this futsal formation is to have the strongest player play in midfield. They will be the link between the defenders and the attacker. 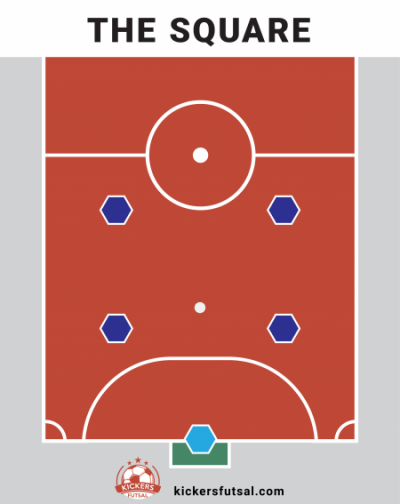 If your futsal team has little experience, then the square formation offers a simple balance with two attackers and two defenders. However, the opponent might be able to pick up on your strategy, but you can solve the problem if your teammates are flexible. 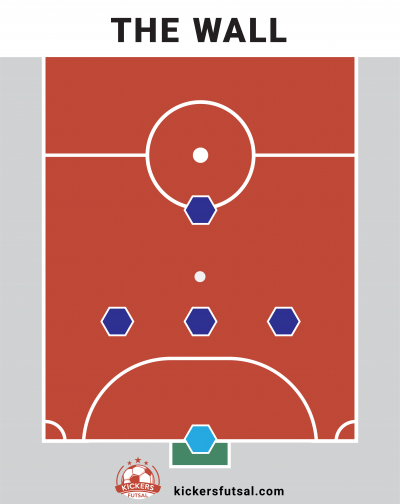 This is a super defensive strategy, and it is best applied at certain times of the game compared to using it as the default training and playing strategy. This formation is best applied when you are trying to prevent the other team from scoring. 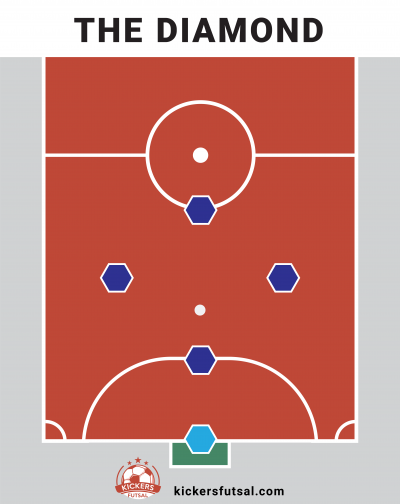 This is the best strategy for futsal teams that are confident about their ball handling and possession skills. The key to using this formation is to have the fastest players in the midfield. The only downside is that the midfielders are at the risk of being trapped outside of the defensive position. 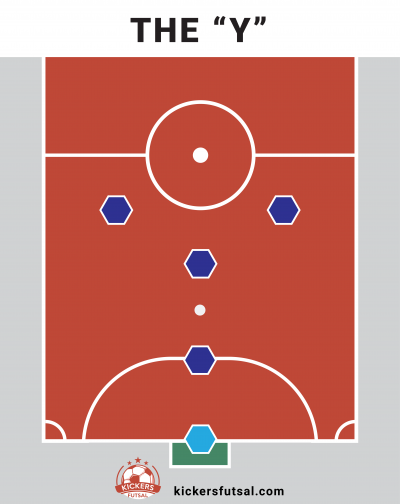 The Y formation is best used by moderately strong teams who are feeling risky. The players need to win the ball as fast as possible and as high on the pitch as possible. The midfield is the key to the success of this strategy, and the midfield player needs to support the defence. 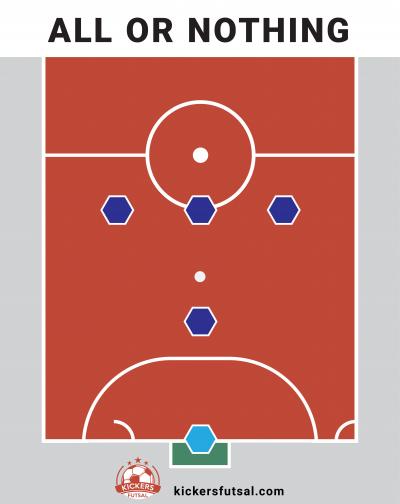 This is a formation that is used by strong teams that are sure that they can outscore their opponents. The all or nothing formation is best used when the team is at a disadvantage, and you want the win.

As outlined above, the formation might change in the course of the game. While training, it is best that you tried out several formations, including defence, attacking, tactics or a formation when you want to remain neutral. 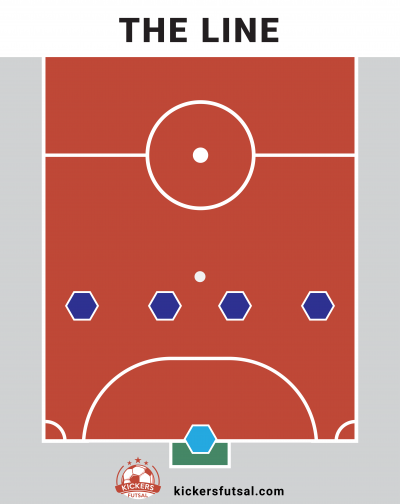 This is a defensive formation that also works as one of the best futsal tactics. It is the best futsal formation when it comes to defense. However, you need to have practiced it beforehand to ensure each player knows how to cover the opposing players. Besides this, you will throw off your opponents since they do not know, which player is playing where.

While the Y formation is best for teams that want to attack and score, the reverse Y futsal formation is best used by strong teams with great attacking power. The strongest player on the team needs to be in the middle. This ensures that they can boost the defender and the two wingers can help get the ball to him for a chance at goal.

Mastering the essential futsal tactics will help you play the game on a higher level than average teams, whether you are playing at a professional or amateur level. However, it takes a lot of practice to master the various strategies needed to win.

Here are some of the best futsal tactics and strategies today:

By opening the court, we mean that you make sure the wingers are by the sidelines. The main idea here is to give your team more width. The result will be that it will be easy to move with the ball.

No matter what you do, never leave empty spaces on the field. This is the reason why you need to keep on adapting your futsal team set up frequently to suit the current play. This requires all players to communicate and fill any free spaces.

When it comes to scoring a goal, all players need to support the player with the ball. This includes staying close enough and creating a good passing line while keeping the opponents away from your half of the pitch. This calls for you to watch out for the ball to know what happens and the approach to take.

To get the best out of your futsal team setup, you ought to pass the ball and move to a new position. You will not only assist other players, but you will also keep the other team guessing. However, you need to be a team player and focus on completing your passes.

To make this strategy work, you need to remember the rule of 5 passes. Try and send at least 5 passes to your teammates to keep the opponent confused. This way, you will disorganize the opponents. However, you need to strike and score when the opportunity presents itself.

The goalkeeper is not considered in most futsal formations. The goalkeeper needs to be alert and quick and watch out the game unfold. However, they need to delay when making restarts and throws to allow the players to get into formation.

While it seems like an easy strategy, it needs to be executed at the right time. There will be other times when you will need to throw the ball fast to catch the opponents unawares.

Direct the Opponents to Your Sideline

Whichever futsal formation you choose, you need to have a defense strategy. Fortunately, the winger can also play in a defending position. For this strategy, you need to pass the ball to the winger, which forces the opponents to the sidelines.

For this strategy to work, do not allow the opposing player to think or tackle. Try to pull the action to the sidelines, and you will force the opponents to break their formation. You will also open more opportunities to score a goal.

Futsal is a game for everyone, and most professional soccer players started by playing futsal. We hope that these futsal tactics, formation, and strategies will help you improve your futsal game.

In addition, ensure to get enough exercise to improve your stamina while playing the game. Contact us today for more information on futsal tactics and how to improve your futsal team setup.