The popularity of futsal is not hidden from the world as it is one of the few sports that is gradually gaining fans and is now being played globally. Even most popular athletes, like Cristiano Ronaldo can’t resist themselves from enjoying and playing this mini version of football. In spite of being so popular and one of the most enjoyable sports; fans are not fully aware of what this sport called Futsal is about? What more if it comes to Its court dimensions, length, marking, and minimum futsal court size.

The reason for the futsal’s popularity, among the world’s renown athletes, is that it allows athletes to develop a strong touch and control as shorter space helps them to be more accurate, alert and in control of what they do. Further, it also allows them to enhance their passing skills without wasting more energy as compared to the soccer ground or field.

Initially, it was played among the hub of soccer Spain, and in other European countries and in South America. But now, it’s getting global popularity because of the increase in number of countries who play that sport; even England is establishing its Futsal academies and also making it a mandatory part to train their athletes which will help them in working on their weaknesses; about which they often got criticized.

Remember the real fan, athlete, and someone associated with the sport are the ones who had the deep know-how of the sport, and would love to explore more about the sport.

But the issue is, from where, they can find the complete details about it, as most of the resources are for the ones who already possess the base-level knowledge of it or are practically associated with it.

Don’t worry, this information-packed article is filled with all the relevant information which anyone can understand. So, don’t worry if you are the one who is new at exploring Futsal a.k.a. Futsal 101 or Futsal for beginners.

Be ready for knowing about futsal from basic to advance, from court dimensions to court length to court marking and so on. Just stick with us and enjoy this intellectually-simulating information about your soon-to-be favorite sport.

What is Futsal Court?

You are maybe wondering what in the world is this sport? Futsal is no exception. It may have come to your mind that what is that thing called futsal. It looks like soccer players have issues with arranging ground and now they are playing that in the basketball ground. Hmm, be aware of the big boys of basketball.

Futsal court cannot be understood without understanding the word futsal. Futsal is derived from the Spanish word “futbol sala” or “futbol de salon” and can be understood in English as an indoor football.

So, it is not that they didn’t get the soccer ground, rather it’s the conscious designing of the sport to help athletes. A futsal court is technically designed to empower the athletes to play soccer under the smaller area to improve their performance. Sorry, big basketball guys, as of now, you can’t play here.

This court is designed in a rectangle shape with the relevant marking, so that athletes can have the bursting and action-packed 20 minutes. However, it’s a bit challenging to build the right setup and to run the sport smoothly.

There are different aspects of the futsal court design which will be covered under their relevant headings. 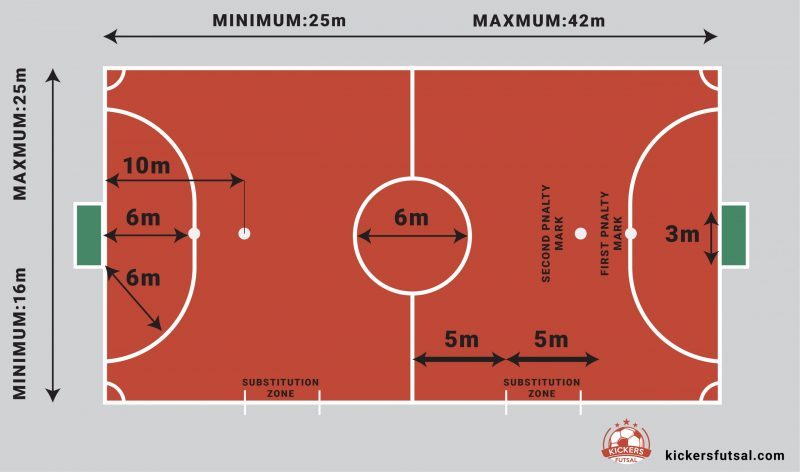 Futsal is gaining immense popularity among the top athletes because of two crucial elements; one is touch and the other is control. In order to ensure the players will meet those objectives, the designing of the field of the futsal court surface must be planned and created as it’ll allow the players to be more in control while playing.

Surface on the ground must be wooden or synthetically made rather than flat, grassy pitch that slows down the game and loses the competitive edge and the main purpose of the game. It’s quite different from the traditional soccer pitch in many ways.

Most people, who are new at exploring this incredible sport; can’t able to identify the difference between the basketball court and futsal court. There’s a big difference in both the courts.

Futsal courts and fields are far bigger than basketball courts due to the nature of the sports as basketball is played with hands and doesn’t require much space to play freely. Conversely, futsal is played with the legs and requires more space for movement, which requires more space to be played than basketball. Furthermore, the basketball court covers the area of 420 square meters (4520 sq. feet), but the futsal court can take up to 800 square meters (8611 sq. feet).

The first difference between the soccer and futsal is: the difference of surface and space of futsal’s court field as the futsal court field is smaller than the traditional soccer field but comparatively bigger than the basketball court field. which makes it more competitive and filled with action rather than a big size traditional grassy soccer pitch. And according to the size, the players in a team are 12 (including a goalkeeper), while in futsal it’s six (including the goalkeeper) in a team.

The second difference is: the difference of markings and measurements of the futsal court which is not identical due to the nature of the game and no existence of wall alongside the perimeter of the goal to make it look more open. In addition, the usage of both natural or artificial turf and oil are not allowed in international games.

The futsal playing court is equally divided into 2 parts, with the circle in the center of the middle line. The point from where the game begins.

Futsal Court Length and Width Measurements (in feet and cm)

For the international level matches, the court length, width, and run of enclosed fields, run of open space court and other measurements must be:

Length of a Futsal Court :

Width of a Futsal Court :

For international matches, measurement standards need to be maintained in order to maintain global uniformity, however, for local matches, smaller pitches can be used based on the local conditions; as in most known-European countries, the courts are still in the developmental stage. 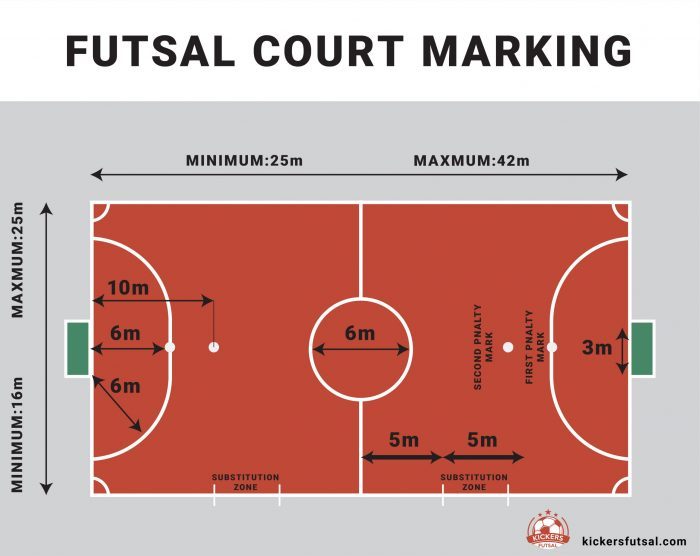 Yellow and white markings are used to ensure the visibility and to avoid clashes in the game which is limited to a certain extent. The line is marked to divide the futsal court in half and is also called the halfway point. From that center point, the 3m radius is marked to ensure the starting point of the game.

Corner arcs are marked five meters in distance to the right angle of the corner arc which is there to ensure that no one violates the right towards the goal.

Other than corner marking, additional marking is being done, if the 2nd penalty is spotted five meters apart.

Goals on each side are developed and marked on the nucleus of the goal line, for where the polls are engraved forming a rectangular shape. The space between both posts is 3 meters and the height from the ground is 2 meters from the horizontal bar.

Nets of nylon, jute, or hemp are attached on the backside of the goal post for a clear indication of the goal.

Substitute zone, from where players can swap with their team members to ensure the best players according to the situation are presented. These zones are marked eighty meters on the length of the half on and half of the pitch where the benches of team members are located. And parallel to the center of the court, the point from where it’s divided into 2 parts located the bench of officials.

Now, compare and ask how much value this article adds to your knowledge base and makes you a more informed fan and athlete. Stay tuned with us for more informative and valuable articles. We hope we helped you in understanding about Futsal and become interested in this sport.